Performing in their famed black masks and matching vintage shirts, The Hang-Ten Hangmen bring all of the attitude, fun and songs you love to the stage! 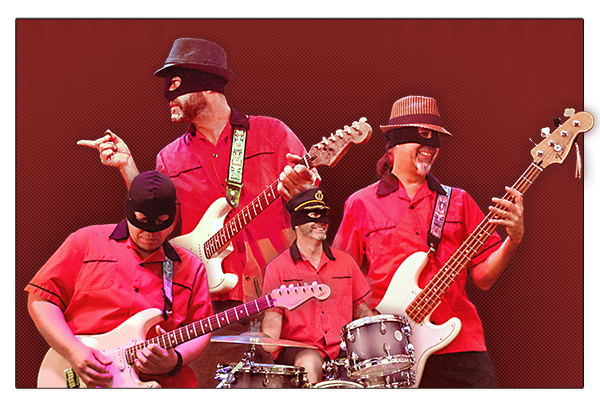 From classic surf instrumentals like “Miserlou” and “Rumble” to modern day covers of Los Straitjackets, you’ll also hear vocal hits from Elvis, Bill Haley and even current rockabilly star J.D. Machperson. Not enough? The Hang-Ten Hangmen also have hit records of their own, including the critically acclaimed surf instro “Destination Saturn” and full length vinyl release “This is Boss!”

The Hang-Ten Hangmen have even been called upon to back some pretty great frontmen, including Eddie Angel, Eli “Tigerman” Williams and “Butch” Murphy.

Having played throughout Vancouver, Portland, Las Vegas, San Diego, Palm Springs, Toronto and everywhere in between, these guys know how to put on a show. Keep your eyes open for the next The Hang-Ten Hangmen gig, or hire them out for your next event!